- Plato and the Platonic Tradition in Russian Education, Science and Ideology (1840-1930) 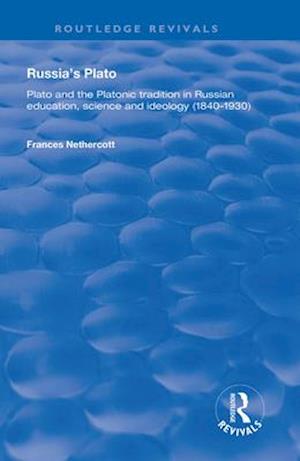 This title was first published in 2000. This work identifies the differences between the Russian intellectual approach to reading Plato and that of other European countries. This study offers a complex perspective on Russian philosophical learnings up to 1930. The book contains five chapters with the first aiming to provide the general institutional context in which Russian 19th century Plato scholarship developed, caught as it were, between the rise of the historical sciences and the heavy hand of state interference in standardizing the educational system in the name of nation building and modernization. The second chapter attempts to illustrate how Plato served as a reference in Russian philosophical culture and the third deals with aspects of Russian philosophy of law. In the fourth chapter, the author shifts his approach to compare and contrast a number of reactions to a single dialogue, the "Republic" and in the final concluding chapter, addresses the question of whether it is legitimate to speak of a Russian Platonism.