- A Free Community of Equals

indgår i serie Founders of Modern Political and Social Thought 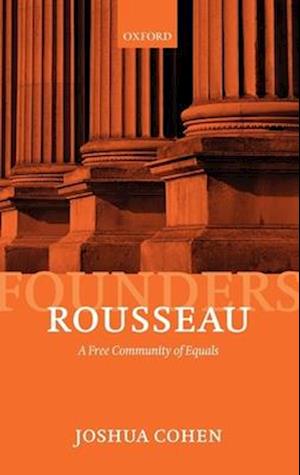 In famously beautiful and laconic prose, Jean-Jacques Rousseau presents us with a forceful picture of a democratic society, in which we live together as free and equal, and our politics focuses on the common good. In Rousseau: A Free Community of Equals Joshua Cohen explains how the values of freedom, equality, and community all work together as parts of the democratic ideal expressed in Rousseau's conception of the 'society of the general will'. The bookalso explains Rousseau's anti-Augustinian and anti-Hobbesian idea that we are naturally good, shows why Rousseau thinks it is reasonable for us to endorse that idea, and discusses how our natural goodness might make a free community of equals possible for us. And Cohen examines in detail Rousseau's picture ofthe institutions of a democratic society: why he emphasised the importance of political participation, how he argued against extreme inequalities, and what led him to embrace a civil religion as necessary for the society of the general will. This book provides an analytical and critical appraisal of Rousseau's political thought that, while frank about its limits, also explains its enduring power.

Forfattere
Bibliotekernes beskrivelse Rousseau forcefully describes the ideal of a democratic society, in which we live together as free and equal, and our politics focuses on the common good. Joshua Cohen explores this ideal, explaining why Rousseau thought that it was possible for human beings to live in such a society, and discussing the enduring importance of his political ideas.