- A Risky Meeting at Sea That Saved Democracy 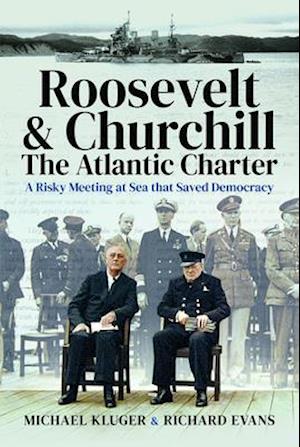 Winston Churchill was no stranger to storms. They had engulfed him in various ways throughout his long career and he had always turned to face them with jutting jaw and indomitable spirit. Dark clouds had hovered over him from the moment he became Britain's Prime Minister in May 1940. Now, fifteen harrowing months later, he was setting out to meet President Franklin Roosevelt, the one man who could offer real assistance in his hour of need. And another storm awaited--this time one of a meteorological kind as his ship, HMS Prince of Wales, ran into a howling gale within hours of leaving its base at Scapa Flow.

After five days, the coast of Newfoundland hove into view and Britain's Prime Minister was piped aboard USS Augusta at Placentia Bay to meet with FDR. The meeting produced a document, strangely never signed, called The Atlantic Charter--an eight-point agreement designed to act as a guide for how the world's nations should behave towards each other in the post-war years. Many of the principles laid out in this document are incorporated into the Charter of the United Nations. In this book, the authors explain how this document came into being--bits of it being scrawled out on scraps of paper over dinner--and delve into the lives of the two most prominent and influential figures of the twentieth century.