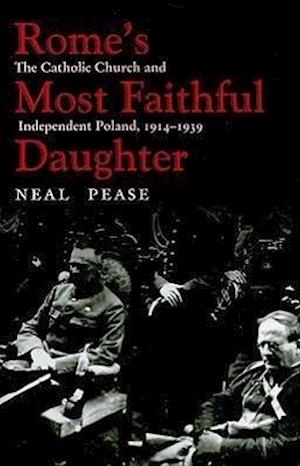 When an independent Poland reappeared on the map of Europe after World War I, it was widely regarded as the most Catholic country on the continent, as \u201cRome\u2019s Most Faithful Daughter.\u201d All the same, the relations of the Second Polish Republic with the Church-both its representatives inside the country and the Holy See itself-proved far more difficult than expected. Based on original research in the libraries and depositories of four countries, including recently opened collections in the Vatican Secret Archives, Rome\u2019s Most Faithful Daughter: The Catholic Church and Independent Poland, 1914-1939 presents the first scholarly history of the close but complex political relationship of Poland with the Catholic Church during the interwar period. Neal Pease addresses, for example, the centrality of Poland in the Vatican\u2019s plans to convert the Soviet Union to Catholicism and the curious reluctance of each successive Polish government to play the role assigned to it.He also reveals the complicated story of the relations of Polish Catholicism with Jews, Freemasons, and other minorities within the country and what the response of Pope Pius XII to the Nazi German invasion of Poland in 1939 can tell us about his controversial policies during World War II. Both authoritative and lively, Rome\u2019s Most Faithful Daughter shows that the tensions generated by the interplay of church and state in Polish public life exerted great influence not only on the history of Poland but also on the wider Catholic world in the era between the wars.