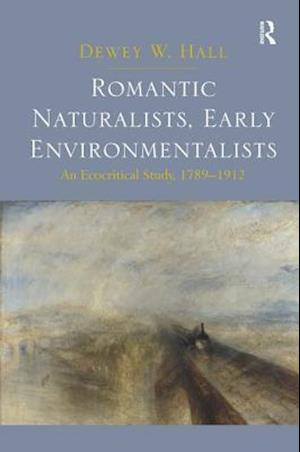 In his study of Romantic naturalists and early environmentalists, Dewey W. Hall asserts that William Wordsworth and Ralph Waldo Emerson were transatlantic literary figures who were both influenced by the English naturalist Gilbert White. In Part 1, Hall examines evidence that as Romantic naturalists interested in meteorology, Wordsworth and Emerson engaged in proto-environmental activity that drew attention to the potential consequences of the locomotive's incursion into Windermere and Concord. In Part 2, Hall suggests that Wordsworth and Emerson shaped the early environmental movement through their work as poets-turned-naturalists, arguing that Wordsworth influenced Octavia Hill's contribution to the founding of the United Kingdom's National Trust in 1895, while Emerson inspired John Muir to spearhead the United States' National Parks movement in 1890. Hall's book traces the connection from White as a naturalist-turned-poet to Muir as the quintessential early environmental activist who camped in Yosemite with President Theodore Roosevelt. Throughout, Hall raises concerns about the growth of industrialization to make a persuasive case for literature's importance to the rise of environmentalism.