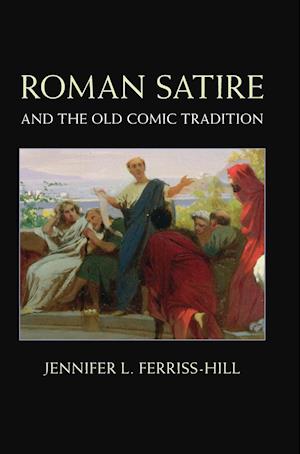 Quintilian famously claimed that satire was tota nostra, or totally ours, but this innovative volume demonstrates that many of Roman satire's most distinctive characteristics derived from ancient Greek Old Comedy. Jennifer L. Ferriss-Hill analyzes the writings of Lucilius, Horace, and Persius, highlighting the features that they crafted on the model of Aristophanes and his fellow poets: the authoritative yet compromised author; the self-referential discussions of poetics that vacillate between defensive and aggressive; the deployment of personal invective in the service of literary polemics; and the abiding interest in criticizing individuals, types, and language itself. The first book-length study in English on the relationship between Roman satire and Old Comedy, Roman Satire and the Old Comic Tradition will appeal to students and researchers in classics, comparative literature, and English.

Forfattere
Bibliotekernes beskrivelse This volume demonstrates that many of Roman satire's most distinctive features derived from Greek Old Comedy. Jennifer L. Ferriss-Hill closely analyzes the writings of Aristophanes, Horace, and Persius and considers their use of authors' personas, self-referential discussions, literary criticism as personal invective, and criticism of individuals, types, and language itself.