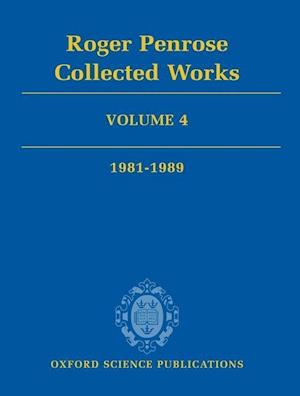 Professor Sir Roger Penrose's work, spanning fifty years of science, with over five thousand pages and more than three hundred papers, has been collected together for the first time and arranged chronologically over six volumes, each with an introduction from the author. Where relevant, individual papers also come with specific introductions or notes. Among the new developments that occurred during this period was the introduction of a particular notion of 'quasi-local mass-momentum and angular momentum', the topic of Penrose's Royal Society paper. Many encouraging results were initially obtained but, later, difficulties began to emerge and remain today. Also, an extensive paper (with Eastwood and Wells) gives a thorough account of the relation between twistor cohomology and massless fields. This volume witnesses Penrose's increasingconviction that the puzzling issue of quantum measurement could only be resolved by the appropriate unification of quantum mechanics with general relativity, where that union must involve an actual change in the rules of quantum mechanics as well as in space-time structure. Penrose's first incursions intoa possible relation between consciousness and quantum state reduction are also covered here.