- Live and Die as Eva Braun and Other Intimate Stories 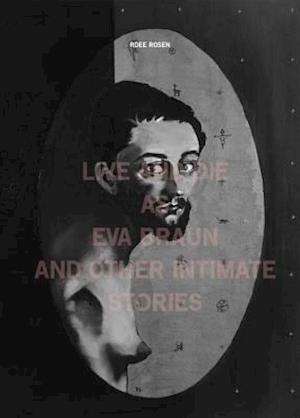 Live and Die as Eva Braun and Other Intimate Stories is a bilingual edition of short writings by Roee Rosen. At the heart of this collection are three provocative texts extracted from important artworks by Rosen, offered here as genre-defying literature at the intersection between reality and fiction, speculative narrative and historical-political critique, humor and eroticism.

Live and Die as Eva Braun (1995-97) leads the viewer through a virtual-reality scenario in the role of Hitler's lover. The project stirred a public and political controversy when first shown in Israel. It was later recognized by many as a watershed work concerning the representation of trauma, Nazism, and the Holocaust. When the work was presented in New York, Linda Nochlin wrote, "The experience of Live and Die, both textual and visual, is unforgettable, like nothing else." The film The Confessions of Roee Rosen (2008) offers yet another uncomfortable doubling of identity, in which three illegal female migrant workers serve as surrogates for the character "Roee Rosen." As a text, these highly condensed monologues reveal themselves to be disorienting subversions of the tradition of literary confession. Finally, the script of Hilarious (2010) offers a torturously bad attempt at dysfunctional comedy, set in the Twin Towers as they collapse.

These three texts are complemented by three of Rosen's short political-aesthetic essays, chosen to reflect the theoretical underpinnings of his approach. The volume concludes with a conversation between the artist and the historian Moshe Zuckermann, an insightful critic of the political instrumentalization of the Holocaust. Live and Die as Eva Braun and Other Intimate Stories is published on the occasion of Rosen's first survey exhibition in Germany, at the Edith-Russ-Haus for Media Art, Oldenburg, and was edited by its curators, Edit Moln r and Marcel Schwierin.