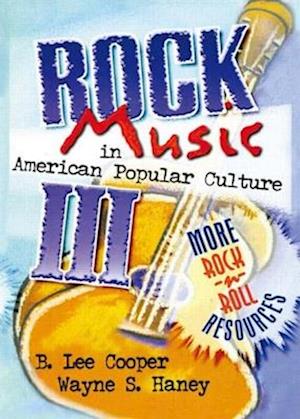 Rock Music in American Popular Culture III: More Rock 'n'Roll Resources explores the fascinating world of rock music and examines how this medium functions as an expression of cultural and social identity. This nostalgic guide explores the meanings and messages behind some of the most popular rock 'n'roll songs that captured the American spirit, mirrored society, and reflected events in our history. Arranged by themes, Rock Music in American Popular Culture III examines a variety of social and cultural topics with related songs, such as:sex and censorship--"Only the Good Die Young" by Billy Joel and "Night Moves" by Bob Seger and The Silver Bullet Bandholiday songs--"Rockin'Around the Christmas Tree" by Brenda Lee and "The Christmas Song" by Nat King Coledeath--"Leader of the Pack" by The Shangri-Las and "The Unknown Soldier" by The Doorsfoolish behavior--"When a Man Loves a Woman" by Percy Sledge and "What Kind of Fool" by Barbra Streisand and Barry Gibbjobs and the workplace--"Don't Stand So Close to Me" by The Police and "Dirty Laundry" by Don Henleymilitary involvements--"Boogie Woogie Bugle Boy" by the Andrews Sisters and "War" by Edwin Starrnovelty recordings--"The Purple People Eater" by Sheb Wooley and "Eat It" by Weird Al Yankovicletters and postal images--"P. S. I Love You" by The Beatles and "Return to Sender" by Elvis PreselyIn addition, a discography and a bibliography after each section give further examples of the themes and resources being discussed, as do extensive lists of print references at the end of the text.