- The Fantastical Garden of NEK Chand 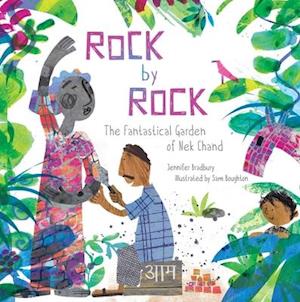 This luminous picture book tells the fascinating true story of artist Nek Chand and how his secret art project--hidden away in a jungle--became one of India's most treasured wonders, second only to the Taj Mahal. In the bustle of the busy streets of Chandigarh, India, Nek Chand saw something no one else did. Where others saw rocks and stones, Nek saw the boyhood village he missed so dearly. Where others saw broken plates and glass, Nek saw laughing men. And where others saw trash, Nek saw beauty. Nek Chand's incredible rock garden, built from stone and scraps and concrete, began as a way for him to express his long-felt grief at having to leave his boyhood village due to the violence caused by the partition of India. What began as a secret and personal (not to mention initially illegal) project became so much more, not only to Nek but to all of India.