- Mining and Minding the Wonder of Unexpected Supply 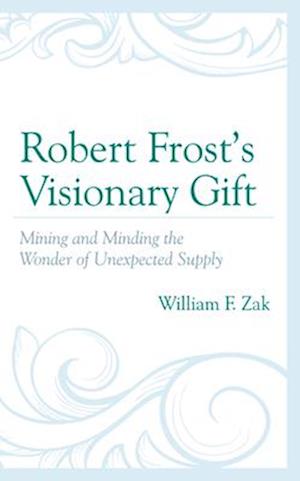 In Robert Frost's Visionary Gift: Mining and Minding the Wonder of Unexpected Supply, William F. Zak provides groundbreaking analysis of well over one hundred of Frost's lyrics, considering each poem as an interrelated portion of the poet's overarching ';constellation of intention.' Beyond biography, this book offers extended, close readings of Frost's oeuvre, building its case incrementally from deftly examined particulars. Zak discusses how the pastoral mode Frost adopts is no depleted, homespun idiom retreating from modernism's complexities, but a self-conscious determination to assume the prophetic mantle from his predecessors (Shakespeare, Milton, Wordsworth, Emerson, and Thoreau). Frost's version of pastoral represents no escape from life's stresses, but the most constructive and life-sustaining means to address life's struggles ';head on'in both sense of that last phrase''.This book makes a case for Frost as America's preeminent philosophical poet. The unfortunate effect of Frost's early detractors' claim that he was merely an ironic and equivocal anecdotalist has for too long relegated his work to the second tier of the modernist poetic pantheon. This study, by contrast, supports Robert Graves' claim for Frost as the ';first American poet who could be honestly reckoned a master poet by world standards.'