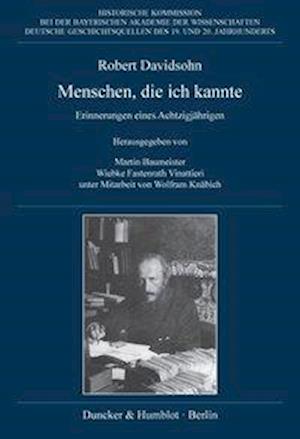 »Robert Davidsohn (1853-1937). People I knew - Memories of an Octogenarian«The book presents the annotated edition of the memoir of Robert Davidsohn (1853-1937), a German-Jewish scholar, still known for his history of Medieval Florence. The autobiography is the document of a life between Germany and Italy, of a man who after a career as a journalist and a newspaper publisher in >Kaiserreich< Berlin, chose to become an independent historian living in Florence and gaining international academic recognition, and, as an old man, had to confront the triumph of Fascism and Nazism.