- Excavations from Meroe to Atbara 1994 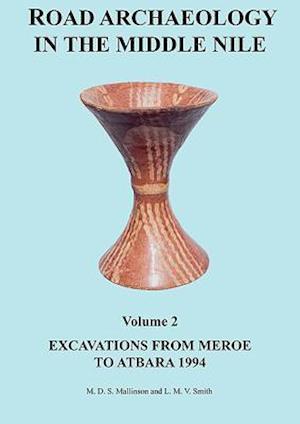 The first season of survey work in 1993 was undertaken in advance of the construction of the North Challenge Road initially between Geili and Atbara. This work was carried out in the SARS concession area from BM98, opposite the Pyramids of Meroe, to Atbara. A total of 170 sites were recorded and this was published in the first volume of Road Archaeology in the Middle Nile (Mallinson et al. 96). In addition, a report was prepared advising the Sudan National Committee for Roads and Bridges of areas which were likely to be damaged by the road construction. The following year it was indicated that due to the advanced development of the road design no rerouting would be possible. In response to this a rescue season was proposed to excavate the sites clearly at risk in the remaining few months before construction and grading began. A limited amount of funds was provided by the Haycock Fund and within this resource a project was assembled with SARS directed by Laurence Smith and Michael Mallinson. As a total of eight sites with 30 archaeological structures appeared directly on the road line a methodology was needed that would permit these to be properly excavated and recorded in the available time of three weeks that the funds would accommodate.

Forfattere
Bibliotekernes beskrivelse Reports on the findings of rescue excavations carried out by SARS in 1994 in advance of the construction of the North Challenge Road, Sudan. The excavation area encompassed from opposite the Pyramids of Meroe to Atbara. Illustrated throughout in black & white with 7 plates in colour