Rising Among Ruins, Dancing Amid Bullets 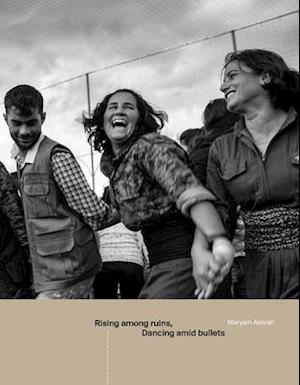 Maryam Ashrafi is a social documentary photographer who believes in long term projects, she chooses to stay behind the front lines and observe the daily lives of combatants, which includes a lot of waiting around. She is above all involved in documenting the everyday life on the Kurdish front. Her work puts a face on a widely commented war which remains, from afar, perceived mainly by the West in terms of the number of refugees. Maryam documents the war in her own way, stressing its complexities and the actual building of a new social model based on equality where women occupy the same roles as men, which is remarkable in this area of the world. This is why, over the years, she has returned to the same places, from Kobane to Tabqa, to show the unique power of the resilience of the population and the will to live and change."The struggle of the Kurdish people and their fight for freedom and fundamental rights have not come to an end, and therefore this book cannot portray all of their journeys, nor shall I stop documenting what is still to come. Yet I believe, as a witness, I owe it to history and to those I have met for sharing some of these images in this book to show part of their journey to freedom and equality", Maryam believes.The book is built on the chronology of the events as documented by Maryam Ashrafi, to understand the evolution of the conflict and its consequences on the populations and their living environment. Photographer James Nachtwey once made a point about such war photographs shown in museums, or in a book; it is "a space for reflection on the universality of the dramas that humanity is going through in its entirety". During her travels, Maryam Ashrafi has created a body of images which highlight very important topics as they are an immediate consequence of war, from the sheer destruction to the refugee camps, as they evoke the foundations of the culture and the identity of the Kurdish people - the ceremonies in honour of martyrs, dances around fires, New Year celebrations etc. Finally, Maryam Ashrafi's work is also about empathy and about invisible wounds; it is obvious that one could not witness a conflict without being caught up in the daily suffering, especially children and women. Maryam finds emotions and feelings, in simple gestures, smiles and dances, these moments of intimacy. The presence of the photographer is forgotten, there remains only the reality of their fight and the resilience of a people. In these moments, she captures expressions that speak so much more than long speeches.Let's listen to them in the midst of ruins, dancing amid bullets.