- My Decade as a Red 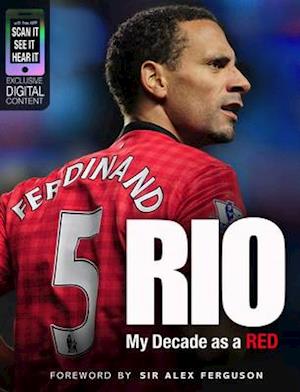 Over the last decade Rio Ferdinand has earned a reputation as one of the world's leading defenders, playing an integral part in the continued success of Manchester United Football Club. Celebrating his ten years at Old Trafford in "My Decade in Red", readers are taken on a visual journey, primarily through the period since Rio's record breaking transfer from Leeds United. Featuring photographs from Rio's private collection, the book chronicles Rio's seminal moments both on and off the pitch, as well as featuring Rio's own unique insights and those of Sir Alex Ferguson. The views of fellow players and other celebrity friends are incorporated via an interactive function that allows videos to be downloaded into smartphones and tablets. The book is a visual and anecdotal gem.

Forfattere
Bibliotekernes beskrivelse My Decade as a Red is a visual celebration of Rio Ferdinand's phenomenal career in football. The book features more than 300 photographs and exclusive, interactive elements with contributions by other major international footballers. numerous illustrations