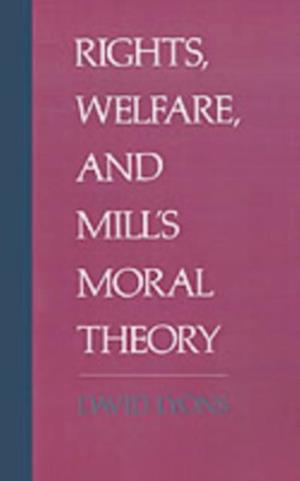 This volume collects David Lyons' well-known essays on Mill's moral theory and includes an introduction which relates the essays to prior and subsequent philosophical developments. Like the author's Forms and Limits of Utilitarianism (Oxford, 1965), the essays apply analytical methods to issues in normative ethics. The first essay defends a refined version of the beneficiary theory of rights against H.L.A. Hart's important criticisms. The central set of essays develops new interpretations of Mill's moral theory with the aim of determining how far rights can be incorporated in a utilitarian framework. They Mill's analysis of moral concepts promises to accommodate the argumentative force of rights, and also provide a significant new reading of Mill's theory of liberty. The last essay argues that the promise of Mill's theory of justice cannot be fulfilled. Utilitarianism is unable to account for crucial features of moral rights, or even for the moral force of legal rights whose existence might be justified on utilitarian grounds.