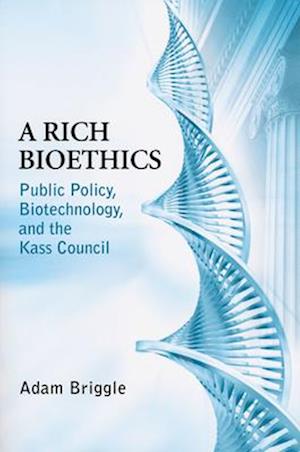 Several presidents have created bioethics councils to advise their administrations on the importance, meaning and possible implementation or regulation of rapidly developing biomedical technologies. From 2001 to 2005, the President's Council on Bioethics, created by President George W. Bush, was under the leadership of Leon Kass. The Kass Council, as it was known, undertook what Adam Briggle describes as a more rich understanding of its task than that of previous councils. The council sought to understand what it means to advance human flourishing at the intersection of philosophy, politics, science, and technology within a democratic society. Briggle's survey of the history of U.S. public bioethics and advisory bioethics commissions, followed by an analysis of what constitutes a "rich" bioethics, forms the first part of the book. The second part treats the Kass Council as a case study of a federal institution that offered public, ethical advice within a highly polarized context, with the attendant charges of inappropriate politicization and policy irrelevance. The conclusion synthesizes the author's findings into a story about the possible relationships between philosophy and policy making. A Rich Bioethics: Public Policy, Biotechnology, and the Kass Council will attract students and scholars in bioethics and the fields of science, technology, and society, as well as those interested in the ethical and political dilemmas raised by modern science.