- The Structure of a Constitutional Revolution 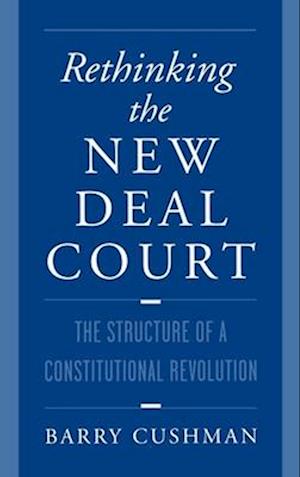 Rethinking the New Deal Court challenges the prevailing account of the New Deal era Supreme Court, which holds that in the spring of 1937 the Court suddenly abandoned jurisprudential positions it had staked out in such areas as substantive due process and commerce clause doctrine. In this view, the impetus for such a dramatic reversal was provided by external political pressures manifested in FDR's landslide victory in the 1936 election, and by thesubsequent Court-packing crisis. Author Barry Cushman, by contrast, discounts the role that political pressure played in securing this "constitutional revolution." Instead, he reorients study of the New Deal Court by focusing attention on the internal dynamics of doctrinal development and the role of New Dealers inseizing opportunities presented by doctrinal change.Recasting this central story in American constitutional development as a chapter in the history of ideas rather than simply an episode in the history of politics, Cushman offers a thoroughly researched and carefully argued study that recharacterizes the mechanics by which laissez-faire constitutionalism unraveled and finally collapsed during FDR's reign. Identifying previously unseen connections between various lines of doctrine, Cushman charts the manner in which Nebbia v. New York'sabandonment of the distinction between public and private enterprise hastened the demise of the doctrinal structure in which that distinction had played a central role.

Forfattere
Bibliotekernes beskrivelse Rejecting as inadequate conventional attempts to understand the "constitutional Revolution of 1937" as a political response to political pressures in the US, Cushman's account treats the events of the 1930s as a chapter in the history of ideas rather than as merely an episode in the history of American politics.