- Electoral Institutions and the Failure of Parliamentary Representation 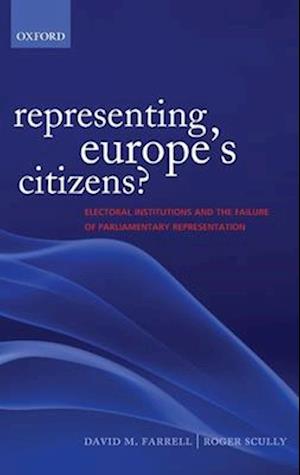 This is the first comprehensive book on sensorless high performance a.c. drives. It is essential reading for anyone interestred in acquiring a solid background on sensorless torque-controlled drives. It presents a detailed and unified treatment of sensorless vector-controlled and direct-torque controlled drive systems. It also discusses the applications of artificial intelligence to drives. Where possible, space vector theory is used and emphasis is laid ondetailed mathematical and physical analysis. Sensorless drive schemes for different types of permanent magnet synchronous motors, synchronous reluctance motors, and induction motors are also presented. These include more than twenty vector drives e.g. five types of MRAS-based vector drives, and eleven types of direct-torque-controlled (DTC) drives, e.g. the ABB DTC drive. However, torque-controlled switched reluctance motor drives are also discussed due to their emerging importance. The book also covers various drive applicationsusing artificial intelligence (fuzzy logic, neural networks, fuzzy-neural networks) and AI-based modelling of electrical machines. Finally, self-commissioning techniques are also discussed. This is a comprehensive thoroughly up-to-date, and self-contained book suitable for students at various levels, teachers, and industrial readership. Peter Vas is a Professor at the Department of Engineering at the University of Aberdeen, UK, where he is also the Head of the Intelligent Motion Control Group. His previous books published by Oxford University Press are extensively used worldwide.The past 15 years have seen declining public support for European integration, and widespread suggestions that a legitimacy crisis faces the European Union (EU). Many in the EU have believed that this problem could be effectively tackled by vesting greater powers in the European Parliament (EP), the Union's only directly-elected institution. The central argument of this book is that, while considerable efforts have been made to increase the status of the EP, it is incrucial respects a failure as a representative body. This failure is grounded in the manner in which the parliament is elected. The electoral systems used for EP elections in many EU countries are, we argue, actively obstructive of Europe's voters being represented in the way that they are mostlikely to respond positively towards. While the behaviour of EP members is shaped strongly by the electoral systems under which they are elected (which vary across the 25 member-states of the EU), the electoral systems currently in place push most of them to behave in ways contrary to what citizens desire. Drawing on public opinion data, surveys of MEPs and considerable qualitative interview evidence, we show that the failure of parliamentary representation in the EU has a strong foundation inelectoral institutions.

Forfattere
Bibliotekernes beskrivelse In recent years vector-controlled a.c. drives have taken over from more conventional d.c. drives. Applications are found everywhere including machine tools and robotics. This text examines sensorless vector-controlled drives and direct torque-controlled drives.This is the first book-length study of its kind to analyse the effects of electoral systems on the representative activities of elected parliamentary representatives. It will be of great interest to comparative legislative studies scholars numerous tables and figures