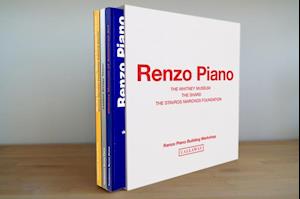 "One of the great beauties of architecture is that each time, it is like life starting again." -Renzo PianoThe Renzo Piano Box is a set of highly collectible volumes by star architect Renzo Piano. The box is an elegantly designed slipcase that envelops three (11" x 11") gorgeously printed paperbound books, each showcasing one of the great architect's iconic buildings: The Whitney Museum, in New York; The Shard in London; and the Stravos Niarchos Foundation in Athens. Callaway plans to publish a box every season, each with three different titles, and to bring to the many readers and fans of Piano's astonishing architectural masterpieces his entire series of collected works.The Whitney Museum, New York: In 2015, the new home of the Whitney Museum opened to the public in downtown Manhattan's Meatpacking District, substantially enlarging the Whitney's exhibition and programming space. The new building includes some 4,650 sq. meters of gallery space distributed over the fifth, sixth and seventh levels. The fifth level boasting a 1670 sq. meters, column-free gallery - making it the largest open-plan museum gallery in New York City. The book includes many architectural drawings and the text at the end of the book provides the reader with a "behind the scenes" view. A conception of the museum that starts from the work of art to arrive at the architectural project. A journey that takes the reader through time and space during its realization.The Shard, London: The London Bridge Tower, the tallest building in Europe, also known as the Shard, is a 72-storey, mixed-use tower located beside London Bridge Station on the south bank of the river Thames. A mix of uses - residential, offices and retail - creates a building that is in use 24 hours a day. The slender, pyramidal form of the tower was determined by its suitability to the mix of large floor plates at the bottom for offices; restaurants, public spaces and a hotel located in the middle; private apartments at the top of the building. The final floors accommodate a public viewing gallery, 240 m above street level. This arrangement of functions also allows the tower to taper off and disappear into the sky, and makes the building look like a shard of glass, a particularly important detail for architect Renzo Piano given the building's prominence on the London skyline. The Stravos Niarchos Cultural Centre, Athens: The Stavros Niarchos Cultural Centre was constructed in Kallithea, 4 km south of central Athens. An important cultural and educational project, the site comprises the National Library of Greece and the Greek National Opera in a 170,000 square meter landscaped park. Previously a parking lot left over from the 2004 Olympic Games, once upon a time the site of a racetrack, this new Renzo Piano project restores the site's lost connections with the city and the sea.