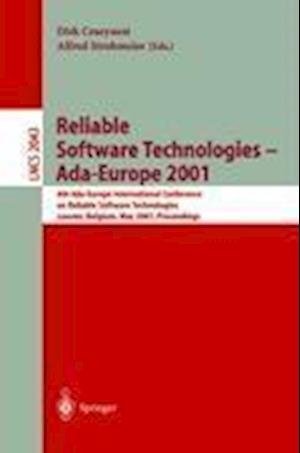 The Sixth International Conference on Reliable Software Technologies, Ada- Europe 2001, took place in Leuven, Belgium, May 14-18, 2001. It was sponsored by Ada-Europe, the European federation of national Ada societies, in cooperation with ACM SIGAda, and it was organized by members of the K.U. Leuven and Ada- Belgium. This was the 21st consecutive year of Ada-Europe conferences and the sixth year of the conference focusing on the area of reliable software technologies. The use of software components in embedded systems is almost ubiquitous: planes fly by wire, train signalling systems are now computer based, mobile phones are digital devices, and biological, chemical, and manufacturing plants are controlled by software, to name only a few examples. Also other, non-embedded, mission-critical systems depend more and more upon software. For these products and processes, reliability is a key success factor, and often a safety-critical hard requirement. It is well known and has often been experienced that quality cannot be added to software as a mere afterthought. This also holds for reliability. Moreover, the reliability of a system is not due to and cannot be built upon a single technology. A wide range of approaches is needed, the most difficult issue being their purposeful integration. Goals of reliability must be precisely defined and included in the requirements, the development process must be controlled to achieve these goals, and sound development methods must be used to fulfill these non-functional requirements.