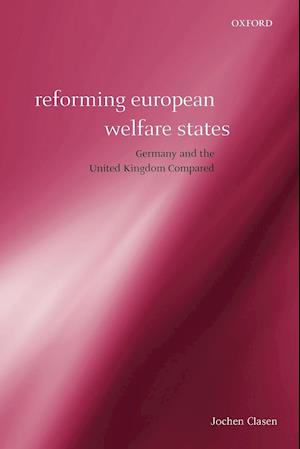 Welfare state reform has been a focus of domestic policy making in many European countries in recent years. Representing almost a third of the EU population and two distinctive models of European welfare states, this book compares development in British and German social policy over the past 25 years. During this time four periods of conservative governments were followed by centre-left administrations in both countries. Moreover, the respective economic and socialpositions of the two countries have been reversed. Adverse socio-economic developments have contributed to the waning of the erstwhile appeal of Germany as a role model of welfare capitalism. By contrast, the UK is seen by some as being on its way to gaining such a position. These trends provide ananalytically intriguing background for a systematic contextualised comparison of reform processes in the two welfare states. Concentrating on three core domains of social policy, the book argues that unemployment support and public pension programmes have been subjected to retrenchment, as well as to restructuring. By contrast, family policies have been extended in both countries. However, patterns of retrenchment and restructuring differ across countries and programmes. In order to explain similarities and variations, the book emphasizes the relevance of three sets of factors: shifts in party policy preferences andpower relations, three institutional variables, and contingent factors impinging on policy direction and profiles. Within pension policy, the relevance of different institutional characteristics and the respective balance between private and public forms of retirement suggest that the concept of'path dependence' is particularly instructive. By contrast, differences in programme structures and their role within national political economies prove to be most relevant for the understanding of changes in unemployment support policy. Less institutionally embedded and expanding, the trajectories of family policies have to be seen in the context of dynamic party policy preferences.