Red Wind Over the Balkans

- The Soviet Offensive South of the Danube, September-October 1944 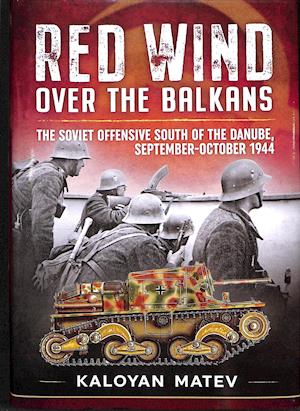 This book describes two Soviet offensive operations carried out during September and October 1944. The first was the operation for the occupation of Bulgaria - known as the 'Bulgarian operation'; the second was the Belgrade offensive operation, which was carried out immediately after the Bulgarian operation. Although separate, the two operations were closely linked to each other: the first was conducted in an almost peaceful manner, which saved resources. This necessitated that the Soviet Command carried out the second operation promptly, which seriously endangered the encirclement of German Army Group's position in the Southern Balkans. Pressed by the advancing Red Army, the German troops withdrew from the territories of Greece and Albania. They also relocated fresh forces from the Western Balkans to the Bulgarian-Yugoslav Border in order to build up a defense line. The book describes in detail the heavy battles during the Belgrade offensive operation. Both combatants suffered from the same problems: heavy mountainous terrain; poor roads and infrastructure; and severe weather conditions. This is one of the few Soviet offensives which started without a large superiority of their forces over those of the enemy. The German soldiers were trained to fight in mountainous conditions, and the Soviets were not. The Soviet armament was more modern, but heavier. Additionally, it was not designed to move on the narrow and steep mountain roads. Therefore, the success of this offensive operation was unclear for a long time. The German Command was but a step away from turning Belgrade into a fortress, and slowing down the war in the region for months. The Soviet troops won, but as a result of very tough fighting. After Bulgaria joined the Allied forces, its military forces were subject to the command of the 3rd Ukrainian Front. The commander of the Front used this new ally to the max - thus conserving Soviet forces. There is also a short description of the activities of the Bulgarian troops, who undertook a secondary offensive from the Aegean Sea to the town of Nis in Southern Serbia. The book describes the operations of both ground and air forces. Special attention is paid to the Soviet tank and mechanized units which participated in both operations, and the book benefits from a detailed set of daily statistics and accompanying analysis which has not been attempted before. As well as a detailed narrative, the author also provides information covering camouflage, markings and unit insignia. The authoritative text is supported by more than 400 photographs (the majority of them previously unpublished); full-colour profiles showing the aforementioned camouflage, markings and unit insignia; and also full-colour battle maps. This book is a result of the author's years spent studying documents from the Russian Federation's Central Archives of the Ministry of Defense and the Bulgarian State Military Historical Archives. Such a detailed study on this topic has not appeared before - and the author's work is unlikely to be superseded.