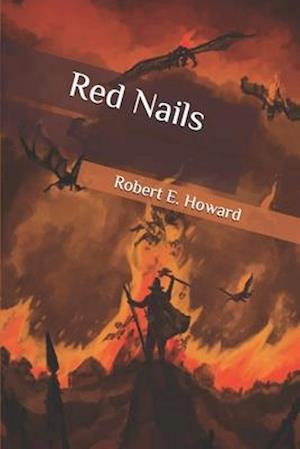 Valeria awoke with a start, to the realization that a gray dawn was stealing over the plain.She sat up, rubbing her eyes. Conan squatted beside the cactus, cutting off the thick pearsand dexterously twitching out the spikes."You didn't awake me," she accused. "You let me sleep all night!""You were tired," he answered. "Your posterior must have been sore, too, after that longride. You pirates aren't used to horseback.""What about yourself?" she retorted."I was a kozak before I was a pirate," he answered. "They live in the saddle. I snatch napslike a panther watching beside the trail for a deer to come by. My ears keep watch while myeyes sleep."And indeed the giant barbarian seemed as much refreshed as if he had slept the wholenight on a golden bed. Having removed the thorns, and peeled off the tough skin, he handedthe girl a thick, juicy cactus leaf."Skin your teeth in that pear. It's food and drink to a desert man. I was a chief of the Zuagirsonce-desert men who live by plundering the caravans.""Is there anything you haven't been?" inquired the girl, half in derision and half infascination."I've never been king of an Hyborian kingdom," he grinned, taking an enormous mouthfulof cactus. "But I've dreamed of being even that. I may be too, some day. Why shouldn't I?"She shook her head in wonder at his calm audacity, and fell to devouring her pear. Shefound it not unpleasing to the palate, and full of cool and thirst-satisfying juice. Finishinghis meal, Conan wiped his hands in the sand, rose, ran his fingers through his thick blackmane, hitched at his sword-belt and said:"Well, let's go. If the people in that city are going to cut our throats they may as well do itnow, before the heat of the day begins."His grim humor was unconscious, but Valeria reflected that it might be prophetic. She toohitched her sword-belt as she rose. Her terrors of the night were past. The roaring dragonsof the distant forest were like a dim dream. There was a swagger in her stride as she movedoff beside the Cimmerian. Whatever perils lay ahead of them, their foes would be men. AndValeria of the Red Brotherhood had never seen the face of the man she feared.