Reconciliation for the Dead 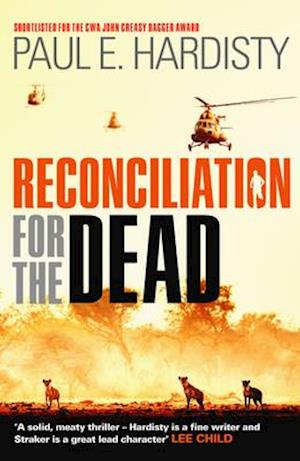 Vigilante justice-seeker Claymore Straker returns to South Africa to testify to Desmond Tutu's Truth and Reconciliation Commission, recounting the horrifying events that led to his exile, years earlier ... The addictive, thought-provoking, searingly emotive next instalment in the critically acclaimed Claymore Straker series...'A gripping, page-turning thriller that is overflowing with substance to go along with Hardisty's atmospheric prose and strong narrative style' Craig Sisterson, Mystery Magazine'A solid, meaty thriller - Hardisty is a fine writer and Straker is a great lead character' Lee Child'The author's deep knowledge of the settings never slows down the non-stop action, with distant echoes of a more moral-minded Jack Reacher or Jason Bourne' Maxim Jakubowski____________________Fresh from events in Yemen and Cyprus, vigilante justice-seeker Claymore Straker returns to South Africa, seeking absolution for the sins of his past. Over four days, he testifies to Desmond Tutu's newly established Truth and Reconciliation Commission, recounting the shattering events that led to his dishonourable discharge and exile, fifteen years earlier.It was 1980. The height of the Cold War. Clay is a young paratrooper in the South African Army, fighting in Angola against the Communist insurgency that threatens to topple the White Apartheid regime. On a patrol deep inside Angola, Clay, and his best friend, Eben Barstow, find themselves enmeshed in a tangled conspiracy that threatens everything they have been taught to believe about war, and the sacrifices that they, and their brothers in arms, are expected to make. Witness and unwitting accomplice to an act of shocking brutality, Clay changes allegiance and finds himself labelled a deserter and accused of high treason, setting him on a journey into the dark, twisted heart of institutionalised hatred, from which no one will emerge unscathed...Exploring true events from one of the most hateful chapters in South African history, Reconciliation for the Dead is a shocking, explosive and gripping thriller from one finest writers in contemporary crime fiction.____________________Praise for Paul E. Hardisty'This is a remarkably well-written, sophisticated novel in which the people and places, as well as frequent scenes of violent action, all come alive on the page...' Jessica Mann, Literary Review'A trenchant and engaging thriller that unravels this mysterious land in cool, precise sentences' Stav Sherez, Catholic Herald'Laces the thrills and spills with enough moral indignation to give the book heft ... excellent' Jake Kerridge, Telegraph'A thriller of the highest quality, with the potential to one day stand in the company of such luminaries as Bond and Bourne' Live Many Lives'A big, powerful, sophisticated and page-turning thriller - thought-provoking and prescient' Eve Seymour'The writing at times is poetic, at other times filled with tension in a narrative complete with well delineated characters and several shocks. Highly Recommended' Shots Mag'Gripping and exciting ... the quality of Hardisty's writing and the underlying truth of his plots sets this above many other thrillers' West Australian'A stormer of a thriller, vividly written, utterly tropical, totally gripping' Peter James'Searing ... at times achieves the level of genuine poetry' Publishers Weekly STARRED review'A page-turning adventure that grabs you from the first page and won't let go' Edward Wilson