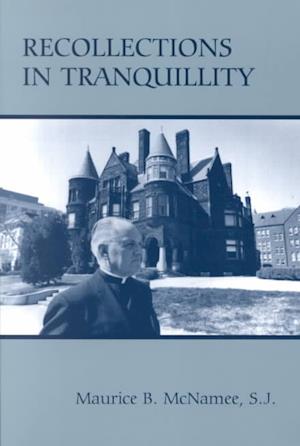 In Reflections in Tranquility, Maurice B. McNamee, SJ. reflects on a life that spans nearly a century. McNamee was born on June 5, 1909, in Montello, Wisconsin and worked on his parent's farm. He began studying at St. Francis Seminary, which was ruled by a Germanic iron-fist. However, McNamee got away with a few boyish pranks. Despite anti-Jesuit sentiment at St. Francis, McNamee decided to enter the Society of Jesus in 1927 and thus he began his life at St. Louis University. The landscape in St. Louis was very different from the Wisconsin farm that McNamee had been raised on. At the time, St. Louis was not only horribly polluted, but the University was surrounded by one of the most wretched slums in the whole United States. Despite the shift in environment, McNamee thrived at St. Louis and began his life-long love affair with art history. Father McNamee began a pilot art program at the university, which shortly developed into a full-fledged art department. Throughout the shifts in Fr. McNamee's life, the historical backdrop is a constant.McNamee has written his memoirs, not because he has any particular importance in the world, but because a whole series of accidental circumstances in his life provided the opportunity for special experiences that might be interesting to some readers.