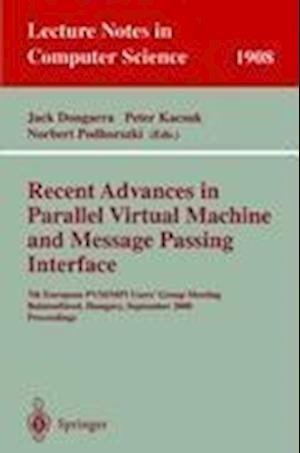 Parallel Virtual Machine (PVM) and Message Passing Interface (MPI) are the most frequently used tools for programming according to the message passing paradigm, which is considered one of the best ways to develop parallel applications. This volume comprises 42 revised contributions presented at the Seventh European PVM/MPI Users' Group Meeting, which was held in Balatonfr ed, Hungary, 10 13 September 2000. The conference was organized by the Laboratory of Parallel and Distributed Systems of the Computer and Automation Research Institute of the Hungarian Academy of Sciences. This conference was previously held in Barcelona, Spain (1999), Liverpool, UK (1998) and Cracow, Poland (1997). The first three conferences were devoted to PVM and were held at the Technische Universit t M nchen, Germany (1996), Ecole Normale Superieure Lyon, France (1995), and University of Rome, Italy (1994). This conference has become a forum for users and developers of PVM, MPI, and other message passing environments. Interaction between those groups has proved to be very useful for developing new ideas in parallel computing and for applying existing ideas to new practical fields. The main topics of the meeting were evaluation and performance of PVM and MPI, extensions and improvements to PVM and MPI, algorithms using the message passing paradigm, and applications in science and engineering based on message passing. The conference included four tutorials and five invited talks on advances in MPI, cluster computing, network computing, grid computing, and SGI parallel computers and programming systems.