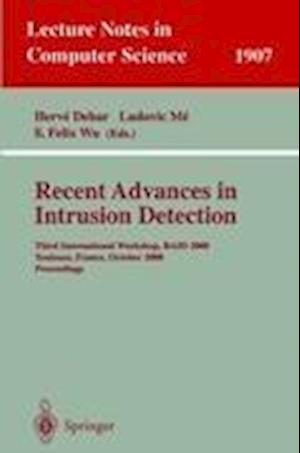 Since 1998, RAID has established its reputation as the main event in research on intrusion detection, both in Europe and the United States. Every year, RAID gathers researchers, security vendors and security practitioners to listen to the most recent research results in the area as well as experiments and deployment issues. This year, RAID has grown one step further to establish itself as a well-known event in the security community, with the publication of hardcopy proceedings. RAID 2000 received 26 paper submissions from 10 countries and 3 continents. The program committee selected 14 papers for publication and examined 6 of them for presentation. In addition RAID 2000 received 30 extended abstracts proposals; 15 of these extended abstracts were accepted for presentation. - tended abstracts are available on the website of the RAID symposium series, http://www.raid-symposium.org/. We would like to thank the technical p- gram committee for the help we received in reviewing the papers, as well as all the authors for their participation and submissions, even for those rejected. As in previous RAID symposiums, the program alternates between fun- mental research issues, such as newtechnologies for intrusion detection, and more practical issues linked to the deployment and operation of intrusion det- tion systems in a real environment. Five sessions have been devoted to intrusion detection technology, including modeling, data mining and advanced techniques.