indgår i serie LIBRARY OF ETHICS AND APPLIED PHILOSOPHY 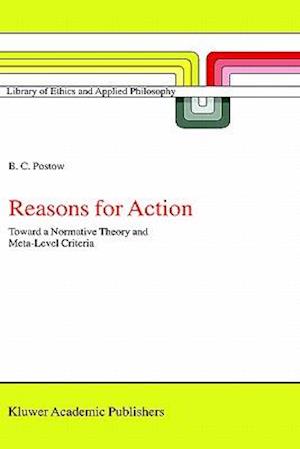 2 first-person point of view, I acknowledge these possible handicaps and try to overcome them. Other people may coherently judge that I am incapable of figuring out correctly what I rationally ought to do, or they may inform me of reasons of which I had heretofore been ignorant, or they may try to help me overcome intellectual hindrances. Like me, these people would be assuming that the goal is to identify what I really rationally ought to do. Nevertheless, we are concerned with reasons for the agent to act in a certain way, rather than with reasons, say, for someone to want it to be the case that the agent act. Thus to be a reason in our sense is to be a consideration which has an appropriate guiding role to play in the. agents deliberation. (An agent is guided by reasons if she determines what to do in light of the reasons. ) Suppose then that a nor mative theory says that it is supremely desirable, or that it rationally ought to be the case, that agents act in a way that maximizes the general utility, but that (since the general utility is never in fact maximized by those who pay attention to it) considerations of the general utility should play no role in the agents' deliberation. Such a theory would not be said to ascribe to agents a reason to maximize the general utility on our usage.