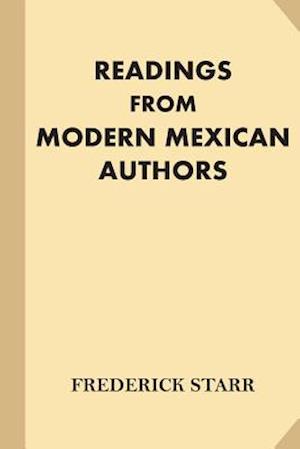 Originally published in 1904. EXCERPT FROM Readings from Modern Mexican Authors PREFACE. When I began visiting Mexico, in 1894, my knowledge of Mexican authors was limited to those who had written upon its arch ology and ethnography. Even the names of its purely literary writers were unknown to me. My first acquaintance with these came from reading some of the writings of Icazbalceta, a critical historian of whom any nation might well be proud, and a man of literary ability. I then sought the books of other Mexican authors and have been accustomed, when in Mexico, to read only those, in such hours of leisure as travel and work have left me. This reading has led me to prepare this little book, in the hope that it may introduce, to some of my countrymen, the literary men of the neighboring Republic. I call the book Readings from Modern Mexican Authors; I might almost have said Living Mexican Authors, for my intention has been to include only such. I have, for personal reasons, made two exceptions-including Icazbalceta and Altamirano. This I have done because I owe much to their writings and because both were living, when I first visited Mexico. Mexican authors write, to a notable degree, for periodical publications. Many Mexican newspapers devote space to literary matter and many extensive works in fiction, in history, in social science and political economy have appeared as brief chapters in newspapers and have never been reprinted. Mexico is remarkably fond, also, of literary journals, most of which have a brief existence. Many of the writings of famous Mexican writers exist only in one or other of these forms of fugitive publication, and are almost inaccessible. The tendency to republish in book form grows, however, and Se or Ag eros is doing an excellent work, with his Biblioteca de Autores Mexicanos (Library of Mexican Authors), now carried to more than fifty volumes, in which the collected works of good authors, past and present, are being printed. Of course, many authors have been omitted from my list, some of whom may have well deserved inclusion; I have omitted none for personal reasons. Specialists, unless they have written literary works outside of their especial field of study, have been intentionally omitted. Men like Nicol s Leon, Herr ra, Orva anos, Belmar, Batres, could not be left out in a history of Mexican literature, but their writings do not lend themselves to translation of brief passages to represent the literary spirit of the country. It has not been easy to devise a definite plan of arrangement for my selections, but the matter is roughly grouped in the following order-Geography, History, Biography, Public Questions, Literature, Drama, Narrative, Fiction. One demand, made of all the material, is that it shall show Mexico, Mexican life, Mexican thought. Every selection is Mexican in topic and in color; together the selections form a series of Mexican pictures painted by Mexican hands. I hesitate at my final remark, because it will sound like a lame excuse for failure. It is not such. In these translations I have not aimed at a finished English form. I have, intentionally, made them extremely literal; I have sometimes selected an uncouth English word if it exactly translates the author, have frequently followed the Mexican form and order of words, and have even allowed my punctuation to be affected by the original. To the English critic the result will be unpleasing, but to those who wish to know Mexico and Mexican thought, it will be a gain. And it is for these that my little book is written. ________________________________________ The sections dealing with Icazbalceta, L pez-Portillo, Altamirano, Ag eros, Roa B rcena, Obreg n and Chavero, were originally published in Unity. Part of the matter relative to Guerrero, has been printed in the American Journal of Sociology.