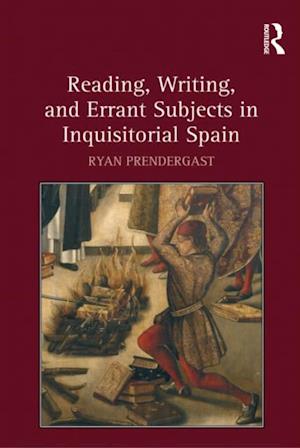 Reading, Writing, and Errant Subjects in Inquisitorial Spain explores the conception and production of early modern Spanish literary texts in the context of the inquisitorial socio-cultural environment of the sixteenth and seventeenth centuries. Author Ryan Prendergast analyzes instances of how the elaborate censorial system and the threat of punishment that both the Inquisition and the Crown deployed did not deter all writers from incorporating, confronting, and critiquing legally sanctioned practices and the exercise of institutional power designed to induce conformity and maintain orthodoxy. The book maps out how texts from different literary genres scrutinize varying facets of inquisitorial discourse and represent the influence of the Inquisition on early modern Spanish subjects, including authors and readers. Because of its incorporation of inquisitorial scenes and practices as well as its integration of numerous literary genres, Don Quixote serves as the book's principal literary resource. The author also examines the Moorish novel/ la novela morisca with special attention to the question of the religious and cultural Others, in particular the Muslim subject; the Picaresque novel/la novela picaresca, focusing on the issues of confession and punishment; and theatrical representations and dramatic texts, which deal with the public performance of ideology. The texts, which had differing levels of contact with censorial processes ranging from complete prohibition to no censorship, incorporate the issues of control, intolerance, and resistance. Through his close readings of Golden Age texts, Prendergast investigates the strategies that literary characters, many of them represented as legally or socially errant subjects, utilize to negotiate the limits that authorities and society attempt to impose on them, and demonstrates the pervasive nature of the inquisitorial specter in sixteenth- and seventeenth-century Spanish cultural production.