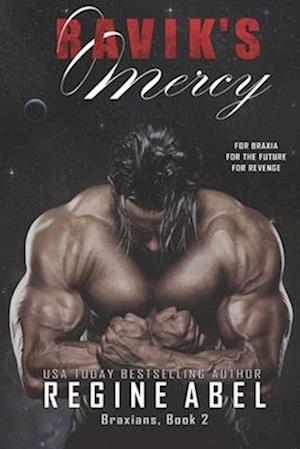 For Braxia. For the future. For revenge.As the rarest hybrid in the galaxy, Mercy has been forced to hide in plain sight for fear slavers and collectors would hunt her down. Quite ironic, considering her late father had been the greatest slaver of the Guldan Empire. Determined to make amends for some of the wrongs he has done, she goes on a mission to Braxia. But those plans are quickly derailed when she encounters Ravik; a mountain of a man with a fearsome face, and a planet in turmoil.As the new ruler of Braxia, Ravik is surrounded by enemies. His planet is teetering on the brink of bankruptcy and stuck in ancient, bigoted ways. When an exotic, sassy, and strong female reluctantly accepts his protection during her stay on Braxia, she becomes both his strength and his greatest weakness. As his detractors plot and scheme against him, Ravik fears the horrors of his past will destroy the fragile happiness and glimmer of hope this woman has brought him and his people.In this brutal, unforgiving world, greed, hatred, and twisted obsessions will clash in a bid for power, for the future, and for revenge.Warning: this book contains scenes of violence that may not be suitable for sensitive reader.