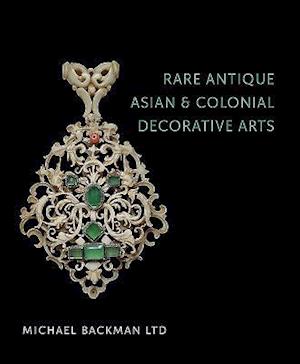 This lively, lavishly illustrated volume presents rare decorative arts from Asia - all of exceptional quality - from ornate handled daggers and exquisite silver fi ligree boxes to diamond-studded jewels, magnifi cent embroidered silk and divination bowls bymaster craftsmen. The decorative arts of South and Southeast Asia, and especially those of the 18th and 19th centuries, and trade items produced during the same period, constitute a much neglected area. Such items, which in a Europeanized context tend to be labelled objets de vertu, are under-represented in public and private collections. While the decorative arts of later Western Europe and North America might be strongly represented, when it comes to South and Southeast Asia, there is a bias towards the ancient, thereligious and the sculptural. And yet the decorative arts of Asia of recent centuries is a more accessible and tangible fi eld for many. The relative attractiveness of more recent Asian decorative arts, for which provenance issues need not be so acute, grows as the movement of archaeological and other early material across international borders becomes evermore complex and problematic, be it for commercial or for exhibition purposes. Seeking to redress the balance, this volume presents objects of exceptional quality that are often incredibly rare - ranging from ornate handled daggers and exquisite silver fi ligree boxes to diamond-studded jewels and magnifi cent embroidered silk. Only some of these objects were made for religious reasons, and, though old, few are ancient. Instead, they are the product of cultural infl uences that have crossed borders, produced in the quest for beauty. The catalogue also includes a selection of items usually designated as `tribal' art. Many of these have a decorative as much as a ritualistic component. Among the objects from Nigeria are a stunning 19th-century processional staff , topped with the figure of a queen, two museum-quality divination bowls carved by master craftsmen, and a striking and possibly unique fi ve-headed dance costume. Most have been sourced from old UK and European collections, and most are likely to have been collected during the colonial era. This is important. Overwhelmingly, most `tribal' art items available commercially today are reproduction pieces and have no place inserious collections. Michael Backman is widely published on Asian culture, art and politics. He is the author of six books that cover all aspects of Asia. His Asian Eclipse was named by The Economist among its `Books of the Year' and appeared on several bestseller lists. His gallery in central London specializes in works of art from India, Southeast Asia, Central Asia, the Himalayas, the Islamic World, and Colonial and Tribal art. The gallery sells to museums and important private collections across the world.