- For Club and Country

indgår i serie Routledge Focus on Sport Culture and Society 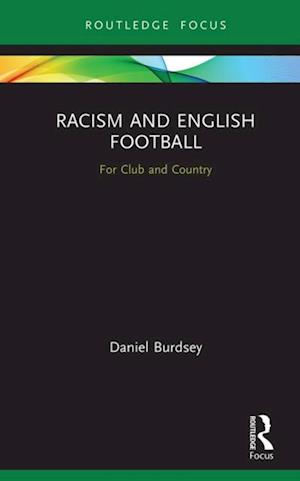 Racism and English Football: For Club and Country analyses the contemporary manifestations, outcomes and implications of the fractious relationship between English professional football and race. Racism, we were told, had disappeared from English football. It was relegated to a distant past, and displaced onto other European countries. When its appearance could not be denied, it was said to have reappeared. This book reveals that this was not true. Racism did not go away and did not return. It was here all along. The book argues that racism is firmly embedded and historically rooted in the game's structures, cultures and institutions, and operates as a form of systemic discrimination. It addresses the ways that racism has tainted English football, and the manner in which football has, in turn, influenced racial meanings and formations in wider society. Equally, it explores how football has facilitated forms of occupational multiculture, black player activism and progressive fan politics that resist divisive social phenomena and offer a degree of hope for an alternative future.Focusing on a diverse range of topics, in men's and women's football, at club and international level, Racism and English Football extends and expands our knowledge of how racism occurs and, critically, how it can be challenged. This is an essential read for scholars and students working on race, ethnicity, sport and popular culture, together with those interested in the social and organisational dynamics of English professional football more generally.