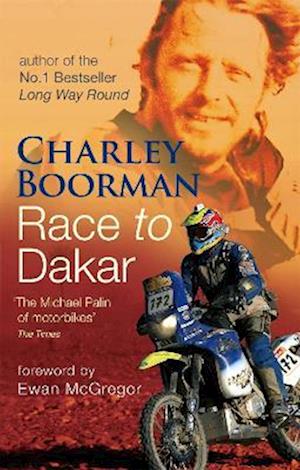 In 2004 Charley Boorman completed his astonishing round-the-world bike trip with his friend, Ewan McGregor. The journey left him exhausted, exhilarated and hungry for a new challenge. And what greater challenge than the Dakar rally? Beginning in Lisbon and ending in the Senegalese capital of Dakar, the rally covers 15,000 kilometres of treacherous terrain, and is widely regarded as the most dangerous race on earth. With his team-mates Simon Pavey and Matt Hall, Charley faced extreme temperatures, rode through shifting sands and stinging winds, and faced breakdowns miles from civilisation. Charley recounts his extraordinary adventures through Portugal, Morocco, Western Sahara, Mauritania, Mali, Guinea and Senegal. He also follows the stories of other riders - an eccentric, dedicated band of professionals and rookies who all dream of one thing: reaching the finishing line. Race to Dakar is the thrilling account of a race that has captured the imagination of millions.

Forfattere
Bibliotekernes beskrivelse * Charley Boorman takes part in the Dakar rally - the most dangerous and exciting race in the world* An amazing biking adventure from the author of the bestselling LONG WAY ROUND Section: 16, colour