Race, Ethnicity, and Inequality in the Workplace 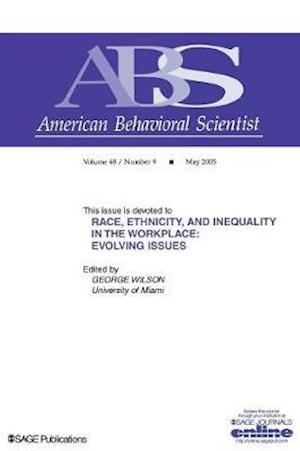 This issue examines patterns of on-going racial and ethnic inequality in the increasingly heterogeneous American workplace. The six articles in this sensitive and thoughtful issue of American Behavioral Scientist, entitled Race, Ethnicity, and Inequality in the American Workplace: Evolving Issues and edited by George Wilson of Miami University, analyze the various aspects of this "modern discrimination," including the dynamics of hiring, promotions, and job dismissals; the aspects of work that impact child development; how politics influences the enforcement of Equal Employment Opportunity standards; the intentional/unintentional use of statistics to reinforce inequalities; and the continuing wage gap for Latinas and African American females.The penetrating articles investigate important topics such as:* Why African American males continue to be handicapped in the promotion/upward mobility process (Smith)* Why African-American males are more vulnerable to job dismissals because of layoffs, firings, downsizing, retrenchments, and mergers than White males (Wilson)* Why African American children of parents in prestigious/high-status occupations do not have the same school/academic performances and health outcomes as White children with parents with similar occupations (Conley and Yeung)* The role political environments play in enforcing racial and ethnic equality laws and the variegated patterns of segregation since the 1960s (Stainback, Robinson, and Tomaskovic-Devey* How racial, ethnic, and gender-based statistics are used to enable inconspicuous but effective institutional discriminatory policies (Baumle and Fossett)* Trends and causes of wage inequality among Latina and African American females compared to White females from the 1990s to the present (Browne and Askew)As the evidence in these papers shows, both overt and subtle inequities based on race and ethnicity still exist in the American workplace. This issue of American Behavioral Scientist is a useful tool to examine the intricacies and impacts of this "modern discrimination," and should be included in every sociology and business library!