Rabbis of our Time 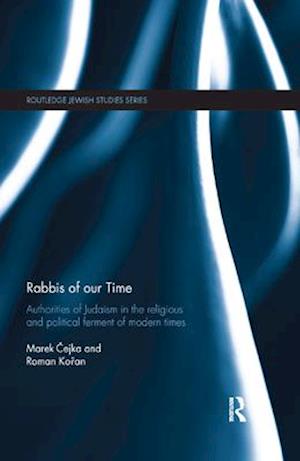 The term 'rabbi' predominantly denotes Jewish men qualified to interpret the Torah and apply halacha, or those entrusted with the religious leadership of a Jewish community. However, the role of the rabbi has been understood differently across the Jewish world. While in Israel they control legally powerful rabbinical courts and major religious political parties, in the Jewish communities of the Diaspora this role is often limited by legal regulations of individual countries. However, the significance of past and present rabbis and their religious and political influence endures across the world. Rabbis of Our Time provides a comprehensive overview of the most influential rabbinical authorities of Judaism in the 20th and 21st Century. Through focussing on the most theologically influential rabbis of the contemporary era and examining their political impact, it opens a broader discussion of the relationship between Judaism and politics. It looks at the various centres of current Judaism and Jewish thinking, especially the State of Israel and the USA, as well as locating rabbis in various time periods. Through interviews and extracts from religious texts and books authored by rabbis, readers will discover more about a range of rabbis, from those before the formation of Israel to the most famous Chief Rabbis of Israel, as well as those who did not reach the highest state religious functions, but influenced the relation between Judaism and Israel by other means. The rabbis selected represent all major contemporary streams of Judaism, from ultra-Orthodox/Haredi to Reform and Liberal currents, and together create a broader picture of the scope of contemporary Jewish thinking in a theological and political context. An extensive and detailed source of information on the varieties of Jewish thinking influencing contemporary Judaism and the modern State of Israel, this book is of interest to students and scholars of Jewish Studies, as well as Religi