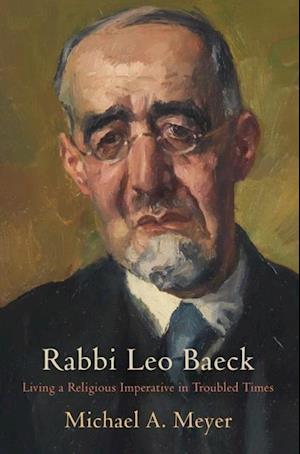 Rabbi, educator, intellectual, and community leader, Leo Baeck (1873-1956) was one of the most important Jewish figures of prewar Germany. The publication of his 1905 Das Wesen des Judentums (The Essence of Judaism) established him as a major voice for liberal Judaism. He served as a chaplain to the German army during the First World War and in the years following, resisting the call of political Zionism, he expressed his commitment to the belief in a vibrant place for Jews in a new Germany. This hope was dashed with the rise of Nazism, and from 1933 on, and continuing even after his deportation to Theresienstadt, he worked tirelessly in his capacity as a leader of the German Jewish community to offer his coreligionists whatever practical, intellectual, and spiritual support remained possible. While others after the war worked to rebuild German Jewish life from the ashes, a disillusioned Baeck pronounced the effort misguided and spent the rest of his life in England. Yet his name is perhaps best-known today from the Leo Baeck Institutes in New York, London, Berlin, and Jerusalem dedicated to the preservation of the cultural heritage of German-speaking Jewry.Michael A. Meyer has written a biography that gives equal consideration to Leo Baeck's place as a courageous community leader and as one of the most significant Jewish religious thinkers of the twentieth century, comparable to such better-known figures as Martin Buber, Franz Rosenzweig, and Abraham Joshua Heschel. According to Meyer, to understand Baeck fully, one must probe not only his thought and public activity but also his personality. Generally described as gentle and kind, he could also be combative when necessary, and a streak of puritanism and an outsized veneration for martyrdom ran through his psychological makeup. Drawing on a broad variety of sources, some coming to light only in recent years, but especially turning to Baeck's own writings, Meyer presents a complex and nuanced image of one of the most noteworthy personalities in the Jewish history of our age.