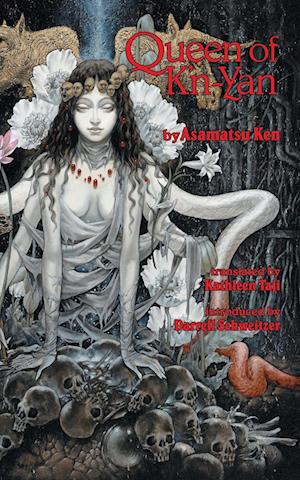 The mummy of a beautiful young girl from Shang Dynasty China is found in an ornate and astonishingly large underground tomb. Preliminary research shows that her cells contain reptilian DNA, and a Japanese research lab is asked to investigate further... Working under the stern Dr. Li, molecular biologist Morishita Anri begins to probe the mysteries locked in the mummy's genetic code, while experiencing strange hallucinations of a different time and place. As Dr. Li hints at prehuman intelligences and huge caverns under the earth, Anri begins to wonder why uniformed soldiers of the PRC Liberation Army are present in the research center in Tokyo. Hallucinations and reality begin to fuse as innocents begin to die in both realities... A classic work of modern horror from the fevered brain of Asamatsu Ken, recognized as a master of weird fiction and horror in Japan. Stunning cover art by Kojima Ayami.