Punk Rock: So What? 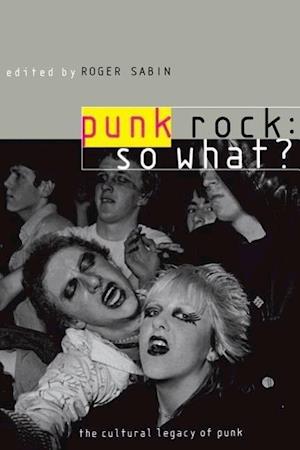 It's now over twenty years since punk pogo-ed its way into our consciousness. Punk Rock So What?brings together a new generation of academics, writers and journalists to provide the first comprehensive assessment of punk and its place in popular music history, culture and myth. The contributors, who include Suzanne Moore, Lucy OBrien, Andy Medhurst, Mark Sinker and Paul Cobley, challenge standard views of punk prevalent since the 1970s. They: * re-situate punk in its historical context, analysing the possible origins of punk in the New York art scene and Manchester clubs as well as in Malcolm McClarens brain* question whether punk deserves its reputation as an anti-fascist, anti-sexist movement which opened up opportunities for women musicians and fans alike. * trace punks long-lasting influence on comics, literature, art and cinema as well as music and fashion, from films such as Sid and Nancy and The Great Rock n Roll Swindle to work by contemporary artists such as Gavin Turk and Sarah Lucas.* discuss the role played by such key figures as Johnny Rotten, Richard Hell, Malcolm McClaren, Mark E. Smith and Viv Albertine. Punk Rock Revisited kicks over the statues of many established beliefs about the meaning of punk, concluding that, if anything, punk was more culturally significant than anybody has yet suggested, but perhaps for different reasons.