- A Work of Historical Fiction about Lieutenant General Lewis B. 'Chesty' Puller 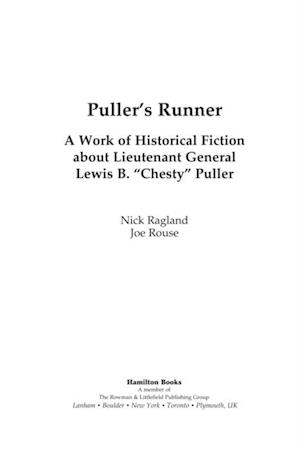 Lewis 'Chesty' Puller is the most famous and most decorated of all Marines. Michael Abbo is an average American kid who enlists in the Marine Corps just before Pearl Harbor. As he struggles to adapt, he unwillingly finds himself assigned to the duty of runner for Chesty Puller, a highly decorated jungle fighter from the 'Banana Wars.' Abbo is shocked by Chesty's harsh training methods and the horrors of the amphibious warfare of the Pacific, but survives World War II, finishes college, and becomes a newspaper reporter for The Chicago Tribune. He is called up from the Marine Reserves in 1950 to serve in Korea, and finds himself assigned once again to Chesty Puller. He serves well throughout the Inchon landing, the battle for Seoul, and into the hellish Chosin Reservoir, meanwhile gaining respect and awe for the once-enlisted man who takes great pride in 'leading from the front.' Abbo eventually returns to the Tribune, and covers Puller's forced retirement as well as his dramatic testimony in the court martial of a Marine drill instructor at Parris Island. For more info, check out www.pullersrunner.com