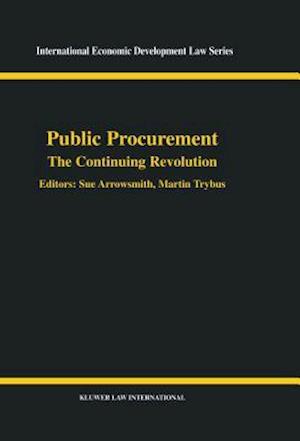 From modest beginnings in the early 1990's, a reform movement in the regulation of public procurement has mushroomed into a global imperative. Two fundamental values of international free trade policy value for money and the deterrence of corruption have brought intense scrutiny to bear on public procurement practices in nearly every country. Now international standards (notably those of the WTO and the EU) must be met if a trading nation is to take its place in the global markets. This collection of essays offers fifteen distinct views on the current status and trends in public procurement and its various aspects. From general discussion of setup, overcoming obstacles, ensuring transparency, and compliance with international rules to specific issues raised in economies as diverse as Kosovo, China, and the United States, Public Procurement: The Continuing Revolution provides a great wealth of insight and information. Although the emphasis throughout is on legal issues, the contributors include not only lawyers but also economists and specialists in purchasing practice. In addition, this is the first book to note the relatively recent trend, in developed countries, toward a less prescriptive, more flexible approach to regulation in which a degree of transparency is sacrificed. The question of how this trend will affect international procurement regimes is perhaps the most vital and interesting aspect of current theory and practice in the field. Most of these essays were originally presented as papers at an international conference hosted by the Public Procurement Research Group at the University of Nottingham in September 2001.