- Photography and Belonging in the British Empire 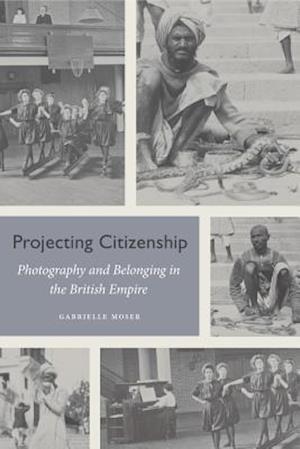 In Projecting Citizenship, Gabrielle Moser gives a comprehensive account of an unusual project produced by the British government's Colonial Office Visual Instruction Committee at the beginning of the twentieth century-a series of lantern slide lectures that combined geography education and photography to teach schoolchildren around the world what it meant to look and to feel like an imperial citizen.Through detailed archival research and close readings, Moser elucidates the impact of this vast collection of photographs documenting the land and peoples of the British Empire, circulated between 1902 and 1945 in classrooms from Canada to Hong Kong, from the West Indies to Australia. Moser argues that these photographs played a central role in the invention and representation of imperial citizenship. She shows how citizenship became a photographable and teachable subject by tracing the intended readings of the images that the committee hoped to impart to viewers and analyzing how spectators may have used their encounters with these photographs for protest and resistance. Interweaving political and economic history, history of pedagogy, and theories of citizenship with a consideration of the aesthetic and affective dimensions of viewing the lectures, Projecting Citizenship offers important insights into the social inequalities and visual language of colonial rule.

Forfattere
Bibliotekernes beskrivelse Examines the relationship between photography and citizenship, through a comprehensive account of the Colonial Office Visual Instruction Committee's lantern slide lecture scheme: a project initiated by the British government at the beginning of the twentieth century that aimed to photograph the entirety of the empire. 64 Halftones, black and white