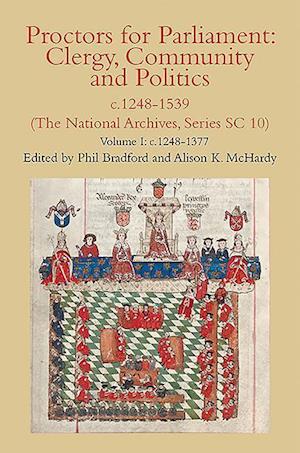 In the middle ages clergy of all ranks, from archbishops to parochial clergy, sent proctors to parliament, whether as representatives of constituency groups - diocesan clergy and cathedral chapters - or substitutes for those expected to attend in person. The National Archives series SC 10 contains 2,520 surviving letters of appointments by these parliamentarians, both groups and, more especially, individuals, cathedral deans, archdeacons, and many bishops;especially valuable are the letters sent by bishops whose registers have not survived, as in the case of Chichester and of the Welsh dioceses. Most numerous of all are the letters of parliamentary abbots. This volume presents the first printed edition of the documents, opening up a level of political activity and interaction which has hitherto been unexplored. The introduction describes the history of proctorial practice and the fortunes of this source, with an analysis of its contents, while the appendices contain ancillary and misfiled documents, and brief biographies of many of the proctors. This first of a two-volume set covers the period from the beginning of the series under Henry III until the end of Edward III's reign. A second volume, covering the years from the accession of Richard II until the end of the series under Henry VIII, with also include analysis of the proctors and the indexto both volumes. Phil Bradford gained his PhD in medieval history from the University of York and is currently Vicar of St Michael's, Worcester; Alison K. McHardy was formerly Reader in Medieval English History at theUniversity of Nottingham. She has published extensively on the relations between crown and church in late-medieval England, and on the politics of Richard II's reign.