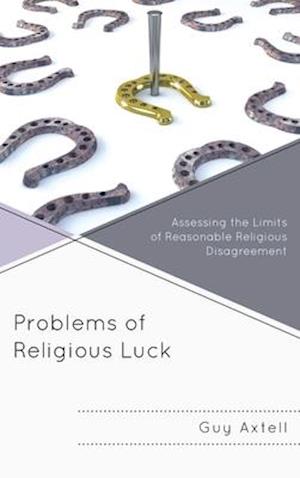 To speak of being religious lucky certainly sounds odd. But then, so does "My faith holds value in God's plan, while yours does not." This book argues that these two concerns - with the concept of religious luck and with asymmetric or sharply differential ascriptions of religious value - are inextricably connected. It argues that religious luck attributions can profitably be studied from a number of directions, not just theological, but also social scientific and philosophical. There is a strong tendency among adherents of different faith traditions to invoke asymmetric explanations of the religious value or salvific status of the home religion vis-a-vis all others. Attributions of good/bad religious luck and exclusivist dismissal of the significance of religious disagreement are the central phenomena that the book studies. Part I lays out a taxonomy of kinds of religious luck, a taxonomy that draws upon but extends work on moral and epistemic luck. It asks: What is going on when persons, theologies, or purported revelations ascribe various kinds of religiously-relevant traits to insiders and outsiders of a faith tradition in sharply asymmetric fashion? "I am saved but you are lost"; "My religion is holy but yours is idolatrous"; "My faith tradition is true, and valued by God, but yours is false and valueless." Part II further develops the theory introduced in Part I, pushing forward both the descriptive/explanatory and normative sides of what the author terms his inductive risk account. Firstly, the concept of inductive risk is shown to contribute to the needed field of comparative fundamentalism by suggesting new psychological markers of fundamentalist orientation. The second side of what is termed an inductive risk account is concerned with the epistemology of religious belief, but more especially with an account of the limits of reasonable religious disagreement. Problems of inductively risky modes of belief-formation problematize claims to religion-specific knowledge. But the inductive risk account does not aim to set religion apart, or to challenge the reasonableness of religious belief tout court. Rather the burden of the argument is to challenge the reasonableness of attitudes of religious exclusivism, and to demotivate the "polemical apologetics" that exclusivists practice and hope to normalize.