Problems of Collapse and Numerical Relativity

- Problems of Collapse and Numerical Relativity 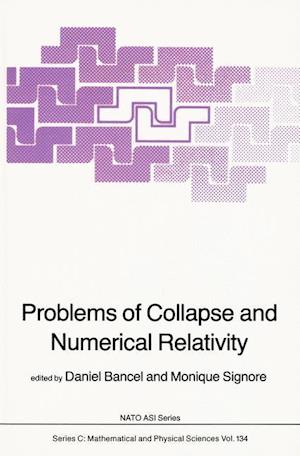 Evry SCHATZMAN Radio-Astronomie, E. N. S. , Paris, France The recent developments of the Supernova theory and numerical relativity can lead in the near future to an understanding of gravitational collapse and to a reliable prediction of the amplitude of the gravitational waves generated during neutron star formation. These prospects explain the great interest which has developed in the international scientific community for the workshop. We were financially limited in the number of guests and participants and we apologize for not having been able to gather all the specialists actually involved in research programs relevant to gravitational collapse and numerical relativity. This limitation took place despite all the financial assistance which we have received from various institutions, first the C. N. R. S. (Centre National de 1a Recherche Scientifique) which has supported the request of Dr. Monique SIGNORE of organizing a workshop. Furhter help was obtained from I. N. A. G. (Institut National d'Astronomie et de Geophysique), Toulouse University (Universite "Paul Sabatier" or "Toulouse III"), the Toulouse section of C. N. E. S.(Centre National d'Etudes Spatia1es), the Department of theoretical physics of the C. E. A. , the Department of Astrophysique of the C. E. A. (Centre d'Etudes Nucleaires, Saclay), D. R. E. T. (Direction des Recherches Etudes et Techniques) and last but not least an important grant from NATO, whose scientific Committee recognized the international significance of the workshop. The meeting was organized by Professor D.