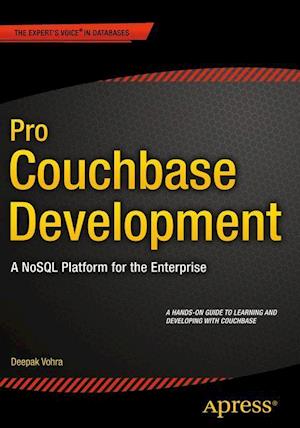 Pro Couchbase Development: A NoSQL Platform for the Enterprise discusses programming for Couchbase using Java and scripting languages, querying and searching, handling migration, and integrating Couchbase with Hadoop, HDFS, and JSON. It also discusses migration from other NoSQL databases like MongoDB. This book is for big data developers who use Couchbase NoSQL database or want to use Couchbase for their web applications as well as for those migrating from other NoSQL databases like MongoDB and Cassandra. For example, a reason to migrate from Cassandra is that it is not based on the JSON document model with support for a flexible schema without having to define columns and supercolumns. The target audience is largely Java developers but the book also supports PHP and Ruby developers who want to learn about Couchbase. The author supplies examples in Java, PHP, Ruby, and JavaScript.After reading and using this hands-on guide for developing with Couchbase, you'll be able to build complex enterprise, database and cloud applications that leverage this powerful platform.