indgår i serie Private Tutor to the Dukes Daughter 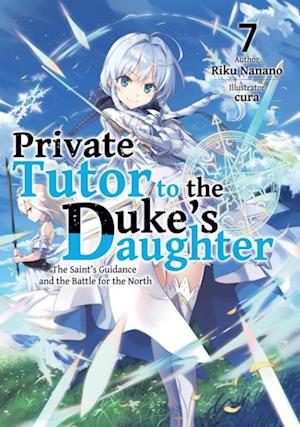 Outlooks are bleak in the Duchy of Howard. The imperial army looming on its northern border dwarfs the duke's forces, and he can't hope for reinforcements from a capital in the hands of hard-line aristocratic rebels. Lady Stella Howard, her younger sister Tina, and Tina's maid Ellie are beside themselves with worry over the fate of their missing tutor Allen-last seen outnumbered and surrounded in the heart of enemy territory-but rescue plans will have to wait. The girls throw themselves into the war effort, anxious to hasten the end of the conflict in any way they can. Yet even their magical talents can only do so much, especially when sinister hooded figures join the enemy ranks.While Allen's friends and family battle for their lives, the young sorcerer has his own trials to contend with. Captured, beaten, and flung into a mysterious ruin, he finds himself forced into a confrontation with startling truths-and an adversary who can more than match his skill.