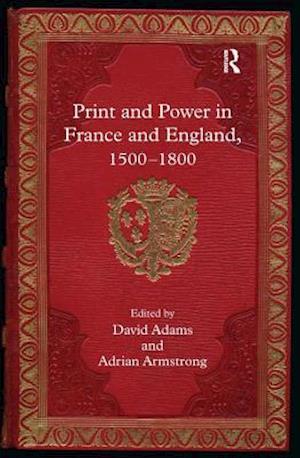 What was the relationship between power and the public sphere in early modern society? How did the printed media inform this relationship? Contributors to this volume address those questions by examining the interaction of print and power in France and England during the 'hand-press period'. Four interconnected and overlapping themes emerge from these studies, showing the essential historical and contextual considerations shaping the strategies both of power and of those who challenged it via the written word during this period. The first is reading and control, which examines the relationship between institutional power and readers, either as individuals or as a group. A second is propaganda on behalf of institutional power, and the ways in which such writings engage with the rhetorics of power and their reception. The Academy constitutes a third theme, in which contributors explore the economic and political implications of publishing in the context of intellectual elites. The last theme is clientism and faction, which examines the competing political discourses and pressures which influenced widely differing forms of publication. From these articles there emerges a global view of the relationship between print and power, which takes the debate beyond the narrowly theoretical to address fundamental questions of how print sought to challenge, or reinforce, existing power-structures, both from within and from without.