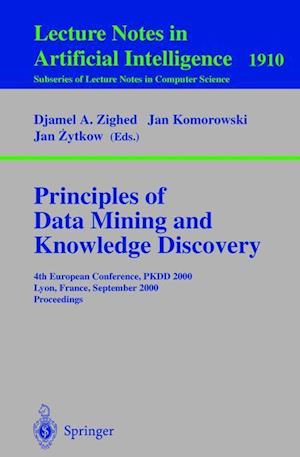 This volume contains papers selected for presentation at PKDD'2000, the Fourth European Conference on Principles and Practice of Knowledge Discovery in - tabases. The rst meeting was held in Trondheim, Norway, in June 1997, the second in Nantes, France, in September 1998, and the third in Prague, Czech Republic, in September 1999. PKDD 2000 was organized in Lyon, France, on 13{16 September 2000. The conference was hosted by the Equipe de Recherche en Ing enierie des Conna- sances at the Universit e Lumi ere Lyon 2. We wish to express our thanks to the sponsors of the Conference, to the University Claude Bernard Lyon 1, the INSA of Lyon, the Conseil g en eral of the R^one, the R egion Rh^one Alpes, SPSS France, AFIA, and the University of Lyon 2, for their generous support. Knowledge discovery in databases (KDD), also known as data mining, p- vides tools for turning large databases into knowledge that can be used in pr- tice.KDD has been able to grow very rapidly since its emergence a decade ago by drawing its techniques and data mining experiences from a combination of many existing research areas: databases, statistics, mathematical logic, machine learning, automated scienti c discovery, inductive logic programming, arti cial intelligence, visualization, decision science, knowledge management, and high performance computing. The strength of KDD came initially from the value - ded by the creative combination of techniques from the contributing areas.